Showing posts from October, 2016
Show all

How to "Allow": Create Optimal Conditions and then Trust

October 28, 2016
When I was nine years old, my fourth grade science teacher had us plant pumpkin seeds in half-cut waxed milk cartons.  I eagerly anticipated the sprouting of the seeds and once they started to grow, I and my classmates measured our plant’s progress each day and recorded it in our scientific lab books. Once the plants were between six and eight inches tall, the teacher concluded our lesson and sent the plants home with us.  I beamed with pride.  My three plants were among the tallest in the class and I couldn’t wait to show them to my parents and our next door neighbor who was an avid gardener. Our neighbor told me that he would help me transplant my pumpkin seedlings into the ground, something  I thought we would do it together.  But unbeknownst to me, his plan was to transplant the plants while I was at school. My first reaction at seeing my three pumpkin plants in the ground was one of disappointment.  They looked so small —much shorter than they were before.  So … when no one w
Read more

October 14, 2016
This is a message to my Bernie Sanders supporting friends who are disillusioned by both candidates and are considering a "protest vote" for either Jill Stein or Gary Johnson. I get it.  I love that Bernie put a voice to what we know to be true--the destruction of our world, a system that is not working for Earth... or for people.  I supported Bernie and love that he fought so hard for us.  I, too, am righteously angry at the desecration of our world, of a system that perpetuates a destructive world view, at an economic systems that must change.  We know that if Bernie had received even one tenth of the republican nominee's corporate media airtime, he would have been the democratic nominee. He is not.  He did, however, fight for progress on the democratic platform... and while changing the party platform isn't revolutionary, it isn't the entirely wrong direction either.
Read more

Michelle Obama's Speech is a beautiful example of how to take a stand with clarity, resolve, and fierce love.  Beautiful. Appealing to our better angels: "When they go low, we go high."  I hope that every single American gets the chance to listen to the whole speech and become who she calls us to be for one another.
Read more 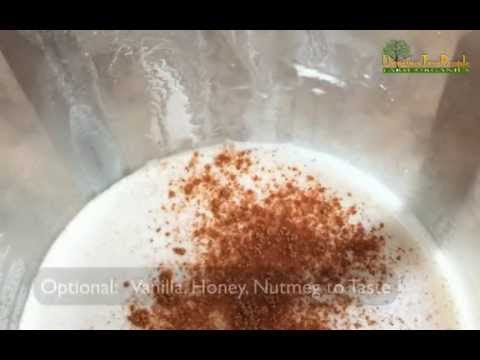 I love this recipe for walnut milk.  We use the 100% organic cotton nut milk bag from Dancing TreePeople Farm You can buy the farm nut milk bag on Amazon
Read more
More posts